US swept by England on opening day of UI International Crown 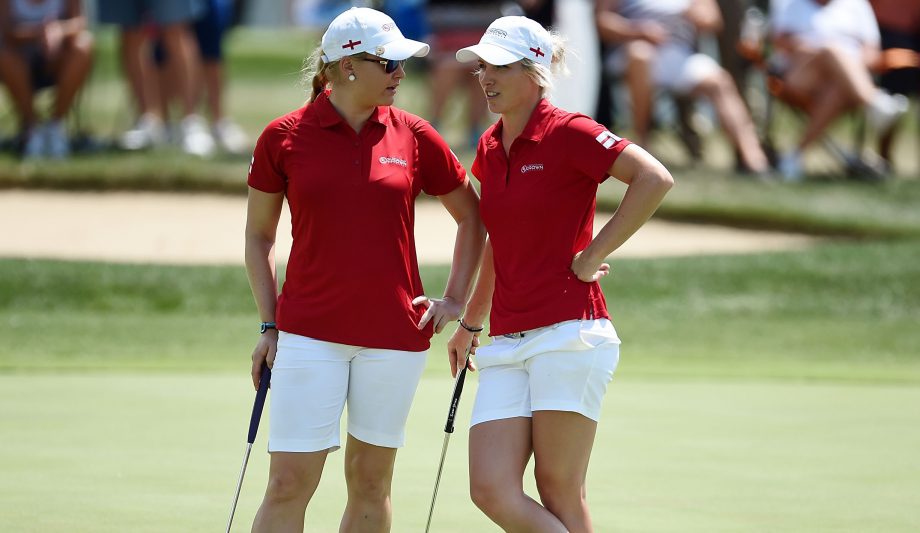 GURNEE, Ill. – For the United States and Taiwan, the first session of the UL International Crown was a repeat of the first day of the inaugural event two years ago.

Each country is hoping for a better weekend.

The U.S. lost both of its four-ball matches to England, and Yani Tseng helped Taiwan sweep Australia on Thursday in the rare team event on the LPGA Tour.

Lexi Thompson and Cristie Kerr lost 2 and 1 to Holly Clyburn and Jodi Ewart Shadoff, and Stacy Lewis and Gerina Piller fell to Charley Hull and Melissa Reid by the same score. Thompson, Kerr and Lewis also were on the American team that was swept on the first day of the first International Crown in 2014 and finished sixth.

“That’s what this format is. You play good golf and you’re going to lose matches, and that’s the way it goes,” Lewis said. “We’re going to go out there and play good golf again, and hopefully we get on the good side of it. We’re still in this thing, and we’ve just got to take care of business tomorrow.”

Next up is two more days of four-ball matches at the sprawling Merit Club about 40 miles northwest of Chicago. The top two teams in each pool and the winner of wild-card playoff between the third-place teams will advance to the singles matches Sunday, with each player from the winning country taking home $100,000 apiece.

With the course set up for low scores, world No. 6 Ariya Jutanugarn made seven birdies while playing with Porani Chutichai for Thailand, but they only managed a halve against Japan’s Ai Suzuki and Ayaka Watanabe. Jutanugarn’s sister, Moriya, teamed with Pornanong Phatum for a 2-and-1 win over Haru Nomura and Mika Miyazato.

Top-seeded South Korea, with each of its four players ranked in the top 12, split its two matches against No. 8 China. Amy Yang and In Gee Chun won 2 up over Shanshan Feng and Xi Yu Lin, but Jing Yan and Simin Feng got two points for China with a 1-up victory over Sei Young Kim and So Yeon Ryu.

“The Chinese girls just played really, really great,” Ryu said. “They made an eagle, they made a bunker shot. I think their teamwork was really nice.”

Tseng and Teresa Lu went off in the first match and cruised to a 3-and-2 victory over Karrie Webb and Su Oh. Tseng and Lu then watched as Candie Kung and Ssu-Chia Cheng posted a 2-up win over Rebecca Artis and Minjee Lee.

Taiwan also won its first two matches at Caves Valley Golf Club in Maryland in 2014, but didn’t score another point all weekend.

“We changed a little bit about the strategy about how we’re going to play this year because we both won on the first day, like four points, but we lose them on Friday and Saturday,” Tseng said. “We kind of changed it a little bit, the teammates and the strategy on the golf course. We tried to make as much birdies as we can instead of one play aggressive and one play more smart and safe.”

Thompson and Kerr never led in their match. Clyburn closed it out with a birdie on the par-4 17th.

“We played really well on the front, and on the back we didn’t play well enough to win,” Kerr said. “A couple more putts go in, a couple better shots. I left Lexi a couple times as a partner, and you can’t do that in four-ball if you want to win.”

China and England did not make the field for the inaugural event, which is determined by the cumulative rankings of the country’s top four players on a given date. They replaced champion Spain and runner-up Sweden.

“We were saying along the way, we’re all pretty big football fans, and obviously we had the Euros recently and we made more points in one day than England did in the whole tournament, so can I just point that out,” a smiling Reid said. “So we’re pretty proud of that, so we’re already on a winner.”

Hull and Reid won three straight holes to go from 1 down to 1 up heading to the back nine. The 20-year-old Hull had three straight birdies and Reid eagled No. 8, a 468-yard par 5.

After Lewis birdied No. 15 to square the match, Hull posted an eagle and a birdie to close it out for England.

“I just love playing in this kind of environment, especially when you are a bit of an underdog,” said Hull, who is headed to the Olympics next month. “I just like proving people wrong, and it just makes you go out there, gives you a little bit more of a buzz.”