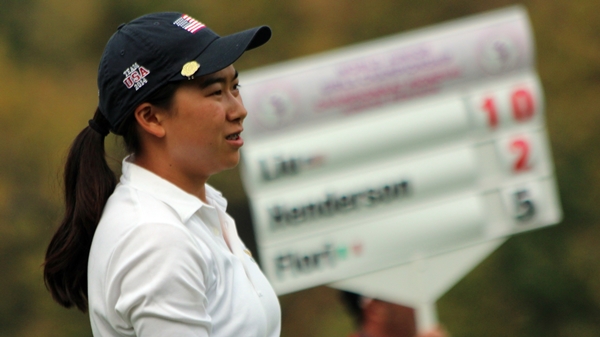 Markham, Ont. (Golf Canada) – Team USA continues to dominate the 15 country field of competitors at the World Junior Girls Golf Championship after firing a team-total score of 7-under par 137 to increase their lead to 16 shots heading into the final round of the inaugural event at Angus Glen Golf Club (South Course) in Markham, Ont.

After starting the day with a comfortable 12-shot lead, Team USA (137-141-137—415) continued their sizzling play on Tuesday and with only 18 holes to play, look poised to claim the championship team title on Wednesday at Angus Glen.

“You know what, I am just so proud of these kids – it’s shaping up really well,” said Team USA non-playing captain Courtney Myhrum. “This is a marathon, this format – everybody has to play well, you can’t just have one superstar on your team. This kid (Mika), is unbelievable, they all are. I think we have a 16 stroke lead going into the final round and it’s a nice place to be.”

Liu, 15, tied the low round of the tournament with her 5-under 67 that included six birdies and a single bogey under breezy overcast conditions at Angus Glen. The young American standout set out Tuesday to improve on her 69 a day earlier and did just that.

“Today, I improved on what I practiced yesterday. I hit the fairways I missed yesterday, I hit greens, and just had many more opportunities for birdies, and I did make more,” said Liu, currently the no. 48 ranked player on the World Amateur Golf Rankings. I only made one bogey today, so that was very helpful. I will continue to work on my swing, and I will focus mainly on putting again – both on the short putts and long ones for speed. Mentally, I will still be the same as during the practice round. I will play my game, talk to my teammates, talk to the other players and enjoy my time out there.”