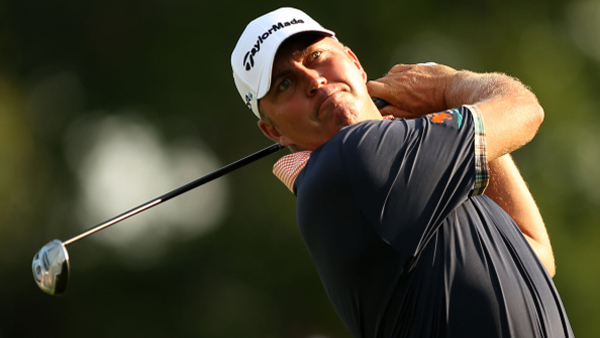 PARAMUS, N.J.  – Rory McIlroy took a week to celebrate his blockbuster summer and paid for it in The Barclays with his worst start in two months.

He could afford a day off.

That wasn’t the case for players like Bo Van Pelt and Paul Casey, and they picked a good time to produce good scores.

With no guarantee of playing beyond this week, Van Pelt opened with three straight birdies Thursday and chipped in for eagle late in his round for a 6-under 65 that gave him a one-shot lead in the opener of the FedEx Cup playoffs.

Casey is No. 118 with a lot on his mind – specifically the birth of his first child in two weeks – and played bogey-free at Ridgewood to join seven other players at 66. That group included Brendon Todd, who is trying to get Ryder Cup captain Tom Watson’s attention as a possible wild-card pick; and Hunter Mahan, who at No. 62 is in danger of missing the Tour Championship for the first time since the FedEx Cup began in 2007.

Ridgewood featured some of the deepest rough of the year, though the greens were soft enough to allow for birdies if players could keep it in the fairway. The average score was 70.8, with 44 rounds in the 60s.

McIlroy was not among them.

The British Open and PGA champion went 13 holes before he made his first birdie and finished with a 74. That ended a streak of 14 straight rounds under par, and it was his highest score in the opening round since a 74 in the Irish Open in June.

“Fatigue isn’t playing a part,” he said. “It’s I think just not putting the time in that I probably should have over the past week. And I think I allowed myself that and deserved that. But this is the consequence of it and I need to work hard this afternoon and go out tomorrow and shoot a good number.”

Van Pelt doesn’t have that luxury. He started his year missing seven cuts in nine tournaments before it slowly started to come around over the last month. He felt he was heading in the right direction and received more confirmation Thursday. Van Pelt didn’t make a bogey, and finished strong with a 10-foot birdie putt on the 16th and the eagle on the par-5 17th hole that put him in the lead.

“As poorly as I played at the start of the year, I’m just kind of glad to be here,” Van Pelt said. “Things have been trending in a lot better direction. So I felt fortunate to be here with the position I was in three months ago. I just felt like if I kept doing what I was doing, hopefully I would at least get to next week and then kind of cross that bridge when I got there.”

Casey hasn’t had a top 10 on the PGA Tour all season and didn’t make it into the playoffs with much room to spare. He’s not sure how long he’ll be around, although a solid start was sure to help.

“I think today was probably a product of really not having really any expectations and just going out there and smashing it around and having fun,” Casey said.

McIlroy had his fun last week, and he was headed to the range after his opening round to get his game back. He took an early double bogey by barely getting out of a bunker and chipping 15 feet by the hole on No. 12, and then going long into a bunker for a bogey on the par-5 13th.

“It’s not a bad thing,” he said. “A score like this would be tougher to take if I had not just come off the weeks that I had. But at the same time, I want to play well and I want to give myself chances to win tournaments.”

Mahan is the only player to compete in every playoff event since the FedEx Cup began. He is assured of two tournaments, though he needs a good week somewhere to keep alive his hopes of reaching Atlanta for the Tour Championship. The top 70 advance to the third week, and the top 30 get to East Lake for the finale. Plus, he hopes to audition for one of the captain’s picks for the Ryder Cup.

“It will be a bonus to make it to Atlanta and it will be a bonus right now to make the Ryder Cup team,” Mahan said. “So I have nothing to be nervous about or get out there and doubt myself. I have to trust myself because everything I’m doing is good and everything else will kind of take care of itself.”

David Hearn is tied for 32nd after carding 69 in the opening round. Graham DeLaet carded a 7-over 78 and is tied for 121st.