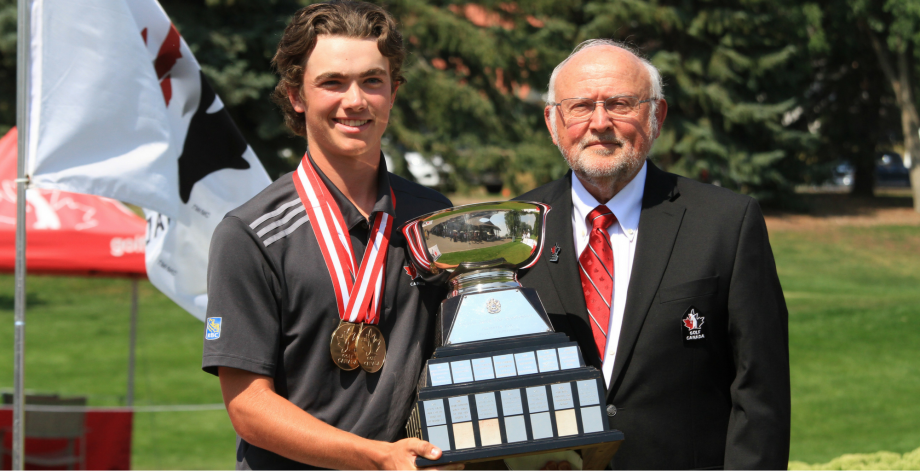 “I knew the first few holes were very gettable. The first six holes can get you off to a roll, which I did,” said the Beaconsfield, Que., talent. “After that, it was just staying calm and just focusing on my game.”

Vandette’s hot streak started early on with two sets of back-to-back birdies on the front-nine. From there the 16-year-old never looked back, recording two other birdies to secure his two-stroke victory.

His teammates didn’t take long to express their excitement as they rushed him beside the green, dousing him in water in celebration right after he received his medals. Despite spending the week eating Pita Pit and joking that he should thank them in his speech, Vandette plans on celebrating in style alongside his team.

“It feels awesome just to compete against the best junior players in Canada and somehow come on top,” added Vandette. “I’d say routines were a lot better today and just my focus on top of the ball was a lot better. Just trusting my shots.”

“Number three would have to be the moose delay we had yesterday, so every tee time was pushed back twenty minutes,” said Vandette with a laugh. “That was pretty funny.”

With a national championship win, a historic final day run and a moose on the loose, the tournament was certainly one to remember for the junior. Vandette will have his name engraved on the Jack Bailey trophy and the Silver Cup as the event’s 80th champion. Vandette earned an exemption into the 2018 Canadian Men’s Amateur Championship from Aug. 7-10.

“It was a great event. I played well so I mean for me it was a pretty good event,” said the 18-year-old. “I couldn’t catch Chris but I’m still proud. You have to control yourself, you can’t control what he’s doing.”

Mei, who tied for the lead going into the final round, also earned the silver medal in the juvenile division at even-par 284. Jeffrey Fang of Newmarket, Ont., rounded out the top three juveniles with a 4-over-par 288.

Always a dedicated golfer, the 15-year-old came out early to complete two extra practice rounds, which he credits to helping him play well in the tournament.

“I’m very pleased with how I played today. Overall, I’m pleased with how I just came out for the entire tournament,” said Mei. “Everything was working pretty fine, my putting was good had a couple of mistakes here or there but that’s golf.”

When all is said and done, it was a historic final round at Medicine Hat Golf & Country Club that the players are sure to remember. The 2019 Canadian Junior Boys Championship is set to take place at Covered Bridge Golf and Country Club in Hartland, N.B., from August 11-15, 2019.