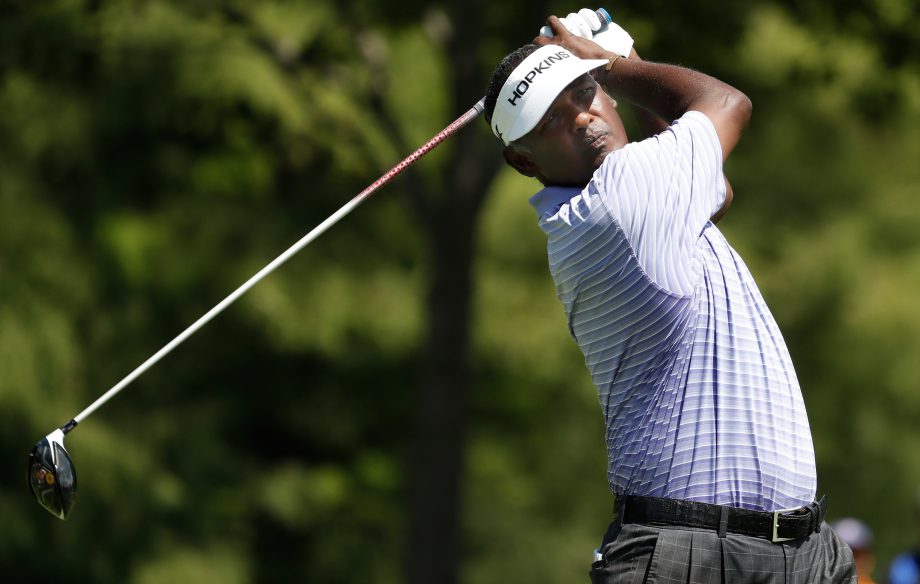 UPPER ARLINGTON, Ohio – Vijay Singh rebounded from a bad shot on the 17th to birdie the final hole Thursday and take a two-stroke lead after the first round of the U.S. Senior Open.

Still playing full-time on the PGA Tour at age 53, the big Fijian shot a 4-under 66 on a hot and humid afternoon at Scioto Country Club, the suburban Columbus course where Jack Nicklaus learned to play.

“I’m driving the ball well,” said Singh, coming off a tie for 56th on Sunday in Connecticut in the PGA Tour’s Travelers Championship. “I’m hitting my irons good. Playing the regular tour, I’ve been playing pretty decent out there too. I came here (and) obviously expected to play well, and I just played well today.”

“The weather is good. It’s perfect. It’s hot, humid,” Jimenez said. “This heat is going to drain a lot from you and probably (make things) more difficult, not because the course is more difficult, but the situation for the players that will be there at the end of the weekend.”

“Every time I tee it up (in senior events), if I don’t win, I’m really disappointed,” Singh said. “So I put a lot more pressure on myself, and that’s not very good. I force myself to play well over here instead of just playing. So my attitude this week is just go and play and see what happens.”

Singh finished second this year in the PGA Tour’s Quicken Loans National in June, but missed the cut at the British Open and the PGA Championship. He said the dry, hard course at Scioto was a tough test.

“It was really firm,” Singh said. “Couldn’t stop even a sand wedge. Nothing was spinning. If you missed a green, it was very difficult to get up and down.”

Defending champion Jeff Maggert had a 70. He won last year at Del Paso in California.

“The course is playing great, very difficult,” Maggert said. “Just every hole is demanding. You got to keep the ball on the fairway and pay attention to what you’re doing around the greens, make sure you’re giving yourself some opportunities to putt for birdies. Missing the greens here can really hurt you pretty bad too. It’s a ball striker’s course, and I’m hitting the ball well. So hopefully, the putter will cooperate over the next three days, and I can finish it off with a good tournament.”

“I actually hit the ball decent today,” Daly said. “I made a few putts, but nothing special. It was cool to play pretty much 16 holes bogey-free. I made a few 5- and 6-footers for pars as well, which helped. I had not been putting very good.”

Bernhard Langer opened with a 73. Woodbridge, Ont., native Dave Bunker follows one stroke behind, and Rod Spittle of St. Catharines, Ont., completes the Canadian contingent at 77.