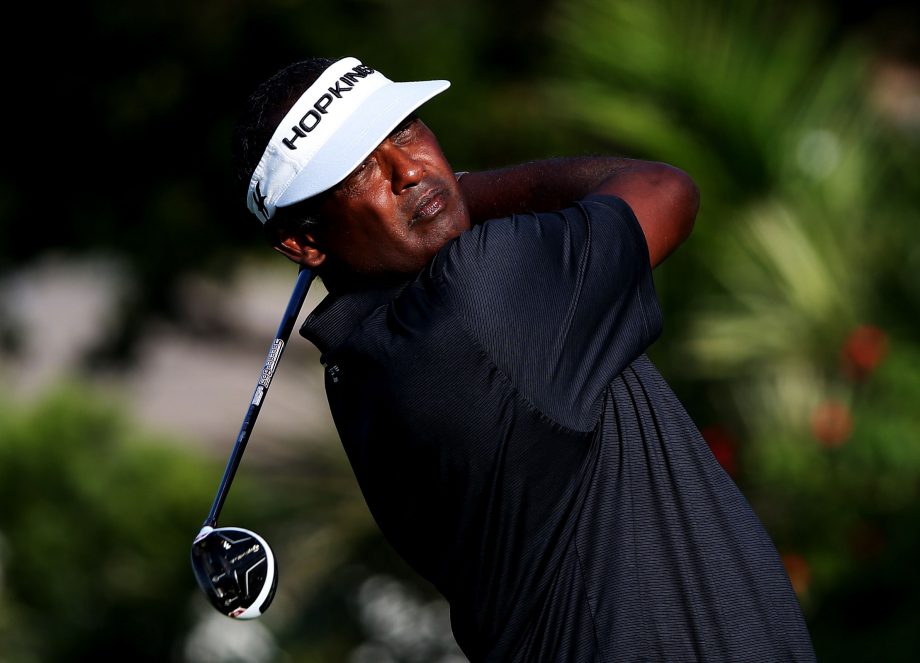 HONOLULU – A month away from turning 53, Vijay Singh showed Thursday in the Sony Open why he doesn’t spend a lot of time with players his own age.

Singh made birdie on his last two holes in gorgeous weather near the shores of Waikiki for a 7-under 63 and a share of the early lead with Ricky Barnes and Morgan Hoffmann. It was Singh’s best score at Waialae by two shots and his lowest opening round in more than three years.

Barnes made four straight birdies at the turn and closed with an up-and-down from behind the green on the par-5 18th, while Hoffman holed a 25-foot eagle putt on his final hole at the par-5 ninth to join the early leaders.

Si Woo Kim of South Korea was another shot back, while Luke Donald and Sean O’Hair were in the group at 65.

Singh won the Sony Open in 2005 when he was No. 1 in the world, a year after the former Masters and PGA champion turned in a nine-win season on the PGA Tour. But he hasn’t won since the Deutsche Bank Championship in 2008, which effectively wrapped up the FedEx Cup.

The big Fijian has been around long enough to realize that a good start is nothing more than that.

“I’ve been playing really well,” he said. “I just haven’t produced the scores. I feel I’m playing well, and see what the next three days bring.”

It helped to hole some long putts, and Singh knocked in a 50-footer for birdie on his third hole. He added a pair of 20-foot birdie putts and a 30-foot birdie putt. More than a good day on the greens, and some solid scrambling at the start, was a book.

He said his body feels better than it has in years, which certainly helps. But he found a book that he has carried with him for the last 20 years that he began reading.

“I haven’t read it for the last 10 years,” he said. “So I picked it up yesterday and started reading a few things that I’ve been doing, and it’s just a different mindset. Golf swing has been the same (so) become a lot more aggressive this year. That’s the plan, to attack the golf course instead of just trying to put it in the fairway and trying to make a good swing.”

The name of the book?

It was easy to be in good spirits in the warm sun of Oahu and a 63 on his card. Singh is stick around next week for the Champions Tour opener on the Big Island. That’s what of his rare ventures onto the 50-and-older circuit, where he has played only six times since he became eligible in 2013.

Barnes and Hoffman are both trying to win for the first time, and one has been at it a lot longer than the other. Barnes has gone 205 starts on the PGA Tour since he turned pro without winning. He was runner-up at the 2009 U.S. Open at Bethpage Black, and he’s had three third-place finishes in his career.

He had to return to Web.com Tour Finals to get his card back, but making it through and getting off to a reasonable start in the fall were indications that his game was on the right path. He changed coaches 18 months ago to get away from relying on his athleticism to find something more repeatable.

“Some things would click for a round, and then they would kind of go away,” he said. “But I felt like the stuff we are working on now is here to stay.”

Donald made headlines in Britain recently for sharing his thoughts about wanting to quit the game because of the struggles that knocked him from No. 1 in the world to No. 50. He said he was frustrated at the lack of progress, though his wedge game looked sharp at the Sony Open, and that’s the key to getting back in the right direction.

“Those are some fleeting thoughts seven or eight months ago,” he said. “I was feeling a bit down about my game, and I think I was in Memphis in a hard place. And my wife at the time was in Paris with Michael Jordan. I was just thinking I need to be in a higher place in Memphis right now while she’s in Paris. That was just putting it in context.”

Canada’s David Hearn shot 65 and has a share of 9th.

Tim Clark, in his first event since the anchored stroke for long putters was banned, opened with a 66.

Robert Allenby, returning to the Sony Open after a bizarre episode last year that left him with a bloodied forehead, no wallet or cellphone and no memory of what happened, hit his first tee shot out-of-bounds onto the driving range, made triple bogey and played even par the rest of the way for a 73.