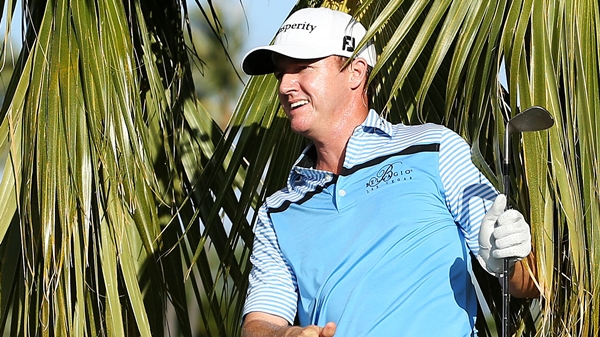 HONOLULU – Jimmy Walker has a two-shot lead in the Sony Open and knows how to approach the final round.

The experience isn’t from Monday at Kapalua, where he had a three-shot lead with five holes to play and wound up losing in a playoff to Patrick Reed. It’s from last year at Waialae, where he emerged from a five-way tie for the lead by closing with a 63 to win.

“Somebody is shooting a low round every day, and you never know where it’s going to come from,” Walker said. “So you’ve got to go out with the expectation you’ve got to shoot a good score tomorrow.”

On Saturday, one of those rounds belonged to Walker.

With a putting performance reminiscent of his final round a year ago, Walker one-putted his last 11 holes on his way to an 8-under 62, giving him a two-shot lead over Matt Kuchar and a chance to become the first back-to-back winner of the Sony Open since Ernie Els in 2004.

“I feel good about what I’m doing,” said Walker, who was at 16-under 194. “Like I said, I can only go out and control what I can do tomorrow, and I can’t put anything on anybody else. I’m going to just keep trying to hit the golf shots, hit the shots I see, put it under the hole, give myself some good looks, make some putts.”

Kuchar, one of three players tied for the lead at the start of Saturday, birdied two of his last three holes for a 68 and was two shots behind.

Without the strong wind typical of this tournament, there has been a score of at least 62 every round. That led Kuchar to say that anyone within six shots of the lead would be a threat in that final round.

If that’s the case, this could very much be up for grabs.

The 21-year-old Thomas, playing in the final group on the weekend for the first time, twice made key putts to turn double bogeys into only bogeys. He was tied for the lead through 12 holes until going well long on the 13th and scratching out a bogey, then dropping another shot on the 16th before closing with a birdie.

Max Homa, a former NCAA champion from Cal, had a 63 and was five shots behind.

Walker, however, has been steady and good during his two-week stay in paradise. This was his 13th consecutive round under par in the Aloha State, and he was tied for the 54-hole lead last week at Kapalua.

Walker said the loss stung, though he was helped by the short turnaround. And playing good golf puts last week even further in the past.

“It’s nice to get back right where we want to be, having a chance to win, especially after last week,” he said. “I think it’s pretty cool.”

Still, he thought he was losing ground when he was only 1-under par for the day going to the eighth hole. He made his birdie at No. 8 and turned to caddie Andy Sanders and said, “Let’s get going.” And they did.

The key putt was a 12-footer at the par-5 ninth to keep his momentum, and a 20-foot birdie putt on the 10th. Just like that, he was back in the game, and Walker poured it on from there. Only after a tap-in birdie at the 15th did it dawn on him that he had been making a lot of putts.

“I kind of went back through it and I counted eight (one-putts), and then when I hit it up on the green on 16 I thought, `This is going to be a tough one to keep the streak going,'” Walker said.

From 30 feet, the putt was in the center of the cup.

Walker stretched his lead to as many as four shots until he caught a plugged lie in the bunker on the 17th, took two to get out, and then made a 5-foot bogey putt. He escaped trouble from a palm tree on the par-5 18th hole, hit his third shot from 210 yards into 10 feet and finished in style.

Webb Simpson, who joined Kuchar and Thomas atop the leaderboard through 36 holes, finally struggled to make putts and shot 72 to fall six shots behind.

Kuchar three-putted the seventh green for bogey to fall to 1 over on his round, and that was the last shot he dropped. He didn’t make enough birdies to get back into the lead, but he made enough to at least give himself a chance.

David Hearn made a 10-foot birdie putt on his last hole that knocked five players out of the 54-hole cut. Seventy players made the Saturday cut at 3-under 207, a group that did not include 16-year-old Kyle Suppa, a junior at Punahou School. Hearn is tied for 61st at 3-under.