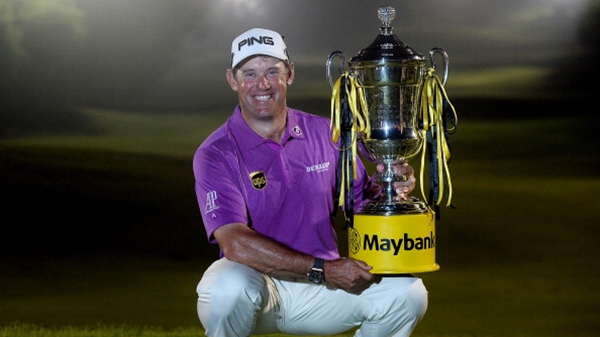 KUALA LUMPUR, Malaysia – Lee Westwood ended a two-year winless drought with a seven-shot victory at the Malaysian Open on Sunday.

After a four-hour delay due to the threat of lightning in the middle of the final round, Westwood went on to shoot a 4-under par 68 to complete an 18-under 270 at the Kuala Lumpur Country Club course for his 36th career victory.

Westwood led from start to finish in the co-sanctioned European and Asian Tour event that he also won in 1997.

“It’s a golf course that suits my game; it’s very tight in certain areas. I played well, I putted well, and the short game is good,” Westwood said.

South Africa’s Louis Oosthuizen (68), the 2012 champion, along with Belgium’s Nicolas Colsaerts (70) and Austria’s Bernd Wiesberger (67) shared a distant second place on 11 under.

The win will not only improve Westwood’s ranking but also help him improve on his current 20th place in the European Ryder Cup standings.

“I feel like I’ve got a short game back and I’m starting to roll a few putts in,” he added. “It makes a helluva difference if you can get up-and-down if you miss a few greens as it keeps the momentum going.”

Westwood, who turns 41 next week, went into the final round leading by one having let slip a four-shot second round lead.

But the 36th-ranked Englishman, and highest ranked player in the field, again found himself four clear after only two holes where nearest rival and playing partner Andy Sullivan triple-bogeyed the second hole after finding water with his tee shot.

Westwood’s drive to victory was then halted mid-afternoon when the threat of lightning stopped play and his lead at four through 11 holes.

He returned to the course after a delay of four hours and 13 minutes to birdie the 13th for a six-shot lead.

Westwood then underlined his class with a birdie on the last.