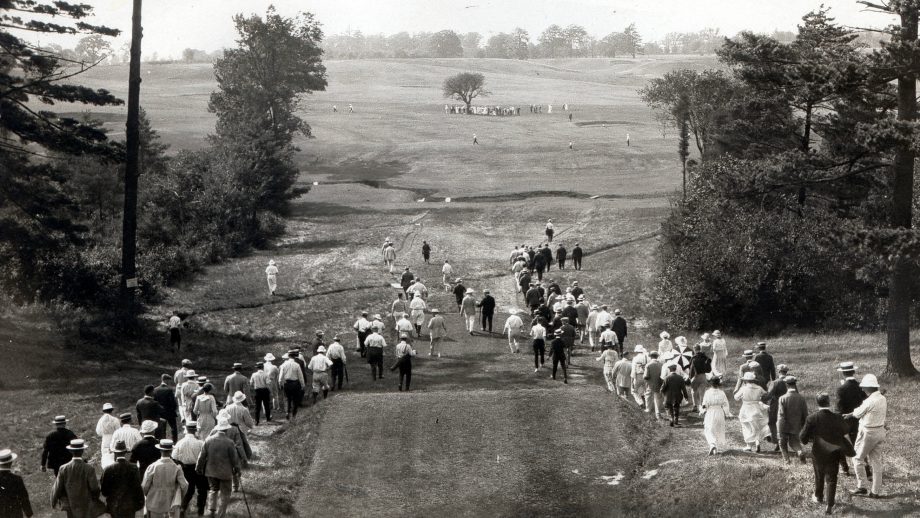 He won the 1920 Canadian Open at the Rivermead Golf Club near Ottawa on August 26 & 27 in a three-way, 18-hole playoff over Tommy Armour and Charles Murray.

He was found alone, outside his home, near death, face-down in a dark pool of blood, by the curb of West Peachtree Street in Atlanta, Georgia, moments before midnight on August 8, 1921.

James Douglas Edgar died on the spot, in the arms of a friend before an ambulance arrived. Despite a coroner’s inquest in the days that followed, and the determined efforts of a newspaperman who found him on the street, the cause of death was never determined and remains unsolved today.

“I’m so thrilled I was able to go back in time and shed some light on this character. He is one of the greatest unknown golfers of all time,” says journalist and fellow Georgian, Steve Eubanks, who chronicled the transplanted Englishman’s untimely death in his 2010 book, To Win and Die in Dixie – The Birth of the Modern Golf Swing and the Mysterious Death of Its Creator.

“The investigators didn’t dive into the back- ground at that point and time. In the 1920s they didn’t have forensic science the way we see in television shows today. A lot of the problem was created at the scene when the accident was misinterpreted as a hit and run,” Eubanks says, noting the cause of death was most like a stabbing. Why would anyone think that someone wanted to murder a harmless, happy go-lucky golf pro?

After finishing 19 shots off the pace in the 1919 US Open at Brae Burn Country Club outside Boston, Massachusetts, Douglas Edgar headed to Ancaster where he teed it up in a field of 88 players that included his star pupil, 17-year-old Bobby Jones, who was playing in the Canadian Open for the first time.

With no Open Championship being played in Great Britain or France, the field was strong, but Eubanks writes that that Head Golf Professional from Druid Hills Golf Club was an afterthought. “He (Doug) was even hard to find before the tournament. It turned out he was in the pubs, partaking of the nectar he so sorely missed in America” during prohibition.

Edgar stole the show shooting rounds of 72-71-69-66-278 over two days to win by an astounding 16 strokes – a record that has stood the test of time and equalled only twice on the PGA Tour in 1924 and 1948. Tiger Woods has the largest margin of victory since 1950 with a 15-stroke win that the 2000 US Open. Jones led after the first round with a 71, while HGCC Head Professional, Nicol Thompson was in the mix with a 73. Edgar finished the afternoon with a 71 and a six-shot lead over James Barnes and Jones, who never played in a Canadian Open again.

“It’s an unbelievable record. It’s still the oldest unbroken record in golf. It was the first time Bobby Jones finished second in a national championship and it was the largest margin of defeat he ever suffered,” Eubanks says.

Edgar, the 1914 French Open champion tied the course record with a 69 in the third round for a nine-shot lead. It was time for the fourth and final round. Despite two bogeys, Doug shot an incredible 32 on the front nine. “He kept the great play going on the back nine, starting out with two consecutive fours, a great three, followed by a par on the 205-yard par three thirteenth, and a birdie on the 375th fourteenth. He played the remaining holes on an average of fours, for a closing round of 66, the most impressive golf that had ever been played in North America,” Eubanks wrote. “The crowd roared its approval when Edgar tapped in. Those in attendance know that they had stood witness to history, and they showed their appreciation with a level of cheering never before heard at a sporting event in Canada.”

Eubanks also noted a quote from famed golfer Harry Vardon who in 1920 said, “Edgar, well I will tell you: I believe this is a man who will one day be the greatest of us all.” Eubanks says, Vardon wasn’t prone to PR spin, but speaking the plain truth.

In 1920, Doug finished T20 at the US Open and made it to the 36-hole final of the PGA Championship at Flossmoor CC in Chicago where he lost to US Open runner-up Jock Hutchinson, while his wife Meg, who was visiting from England, remained in steamy Atlanta with their two children, Rhoda and Douglas Jr. At Rivermead in the Canadian Open, Doug shot opening rounds of 76-75 to find himself two shots behind another of his students, amateur Tommy Armour. On the second day, Doug improved with rounds of 74-73 and found himself in a tie with Charles Murray and Armour, who cracked in the final round with a 76 leading to a three-way playoff. The following day, Edgar won the 18-hole playoff becoming the first person to successfully defend the Canadian Open title. He pocketed $200 and a gold medal for the first victory and $300 for the second.

You should know that another one of Edgar’s students at Druid Hills was Alexa Sterling Fraser who won the 1920 Canadian Ladies’ Open Championship at HGCC. She also won US Women’s Amateur titles in 1916, 1919 and 1920. In 1921, at River- mead, the club where Doug won his second Canadian Open title, she met Dr. Wilbert Crieve Fraser, who she would marry in 1925 in Atlanta before moving to Ottawa to raise a family.

Edgar would go on to write a book, The Gate to Golf and developed a swing aid to go with it – hoping to make it rich! With his second Canadian Open victory in hand, he was in the spotlight and in demand, but Eubanks says Edgar’s homelife and marriage suffered. Doug had a “Tiger Woods problem.”

Eubanks also shares a story of Doug contacting his regular bookie in October 1920 and wagering $700 on himself that he would be the next Southern Open champion. This time Jones finished only two shots behind and well on his way to becoming a star as Edgar collected the $1,000 first- place prize money. In November 6, 1920 Meg Edgar and the children boarded RMS Celtic, a steamship bound for Liverpool from New York, while Doug remained in Atlanta. He followed in December.

The following spring Doug returned to his job at Druid Hills Golf Club, but Meg never returned – she was never coming back to North America. Surprisingly, he failed to register to play in the Canadian Open that was scheduled to be played on August 1-2 at The Toronto Golf Club. Instead, he turned up dead on August 8 at the age of 35.

Eubanks weaves together witness reports from a coroner’s inquest and while some people said it was a car that hit Edgar, no proof was given, nor did anyone hear or see an automobile in the streets when horses were still a popular means of transportation. There were no bumps and bruises on his body that might come from being hit by a car, but what was found was a puncture wound to the femoral artery in the thigh of one of his legs. There was a suggestion that the ladies’ man was having an affair, and when the woman’s husband learned of it, Doug was murdered, but that tale went to the grave with Edgar.

One last vignette that Eubanks leaves us with is an interview he had with Edgar’s grandson, Douglas III, a golf professional who owned the Wheathampstead Golf Club outside London. “In February 2008, the clubhouse at Wheathampstead was broken into by thieves who made off with thousands of dollars of equipment and one priceless heirloom, a Waltham watch presented to Doug upon winning the 1919 Canadian Open.

“I couldn’t insure it as it was impossible to value,” Douglas said. “Twenty years ago, I turned down an offer of $35,000. I just can’t believe it. It was the only time I had ever left my briefcase with the watch inside in the club. The rest of the stolen equipment is insured, but the watch is irreplaceable.”

100 years later, the time has come for a new champion to be crowned at the 2019 RBC Canadian Open. It remains to be seen if they will one day become the greatest of them all.