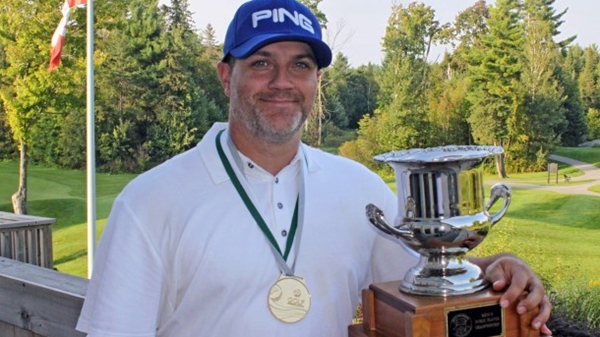 INNISFIL, Ont. — After finishing the opening round at 1-under, Aurora’s Peter Willis looked to hang on to his lead during the final round of the Golf Association of Ontario’s (GAO) Baka Wireless Public Player Championship, Sept. 9, at National Pines Golf Club in Innisfil.

It would not be easy for the 36-year-old Willis who had to fend off challengers from his final group along with the second to last group. Willis remained calm and despite all the moves going on around him, was able to tap in for par and the win on the 18th, finishing the day with a 2-over 74 and the tournament at 1-over 145.

“I played well during the opening round before a slip up at the end,” said Willis. “I think over the two days my ball striking was very good. I was able to make a lot of up and downs to save par, which is pretty much what kept me going.”

Two shots back of Willis were a pair of players: Burlington’s Barrett McCarthy and Oakville’s Derek Dalziel. Barrett finished the day at even par (72), while Dalziel was one-over (73) resulting in them each earning a share of the silver medal at 3-over 147 for the tournament.

“It was a good battle between myself and the two guys I was playing with. But I was able to grind out the win in the end. I was just taking some deep breaths out there and tried to finish off the round,” added Willis.

In the Net A flight, Sarnia’s Nick Powell was able to capture the title after his second straight round of 2-under (70).

As for the Net B flight, Markham’s Fred Bowler fired an eight-under (64) during the final round to move to 5-under for the tournament to take the win.

For the final leaderboard for the Championship Division, click here. And, click here for Net Division results.

The Baka Wireless Public Player Championship has been contested since 1958. It was suspended between 1984 and 1995. This year’s event was a two-round competition with a Championship and Net A and B flight. Former champions include: Ontario Golf Hall of Famer Gerry Kesselring, Ken Trowbridge, Dave Bunker and Lucas Kim. Craig Loughry holds the record for the most victories with four.