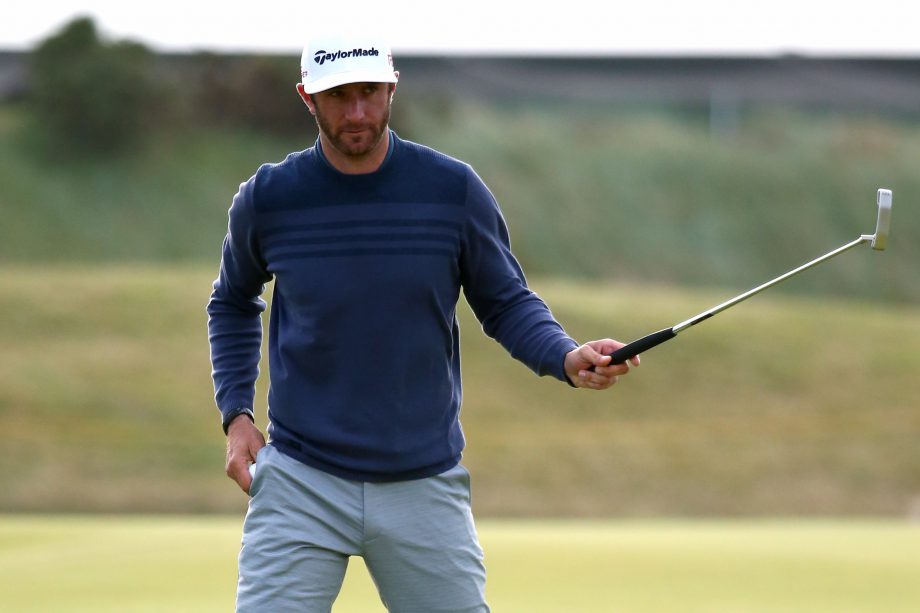 ST. ANDREWS, Scotland – The British Open was stopped just 32 minutes after it resumed Saturday morning when gusts of up to 64 kph blew golf balls across the green and contributed to Dustin Johnson making bogey to fall into a share of the lead.

The second weather delay – rain on Friday, wind on Saturday – meant the first Monday finish in the British Open since 1988.

The R&A was hopeful of resuming the second round at 4 p.m. The third round is set for Sunday and the final round on Monday. The last major to end on Monday (without a playoff) was the 2009 U.S. Open at Bethpage Black won by Lucas Glover.

The R&A was criticized for even resuming the second round. Louis Oosthuizen, who got the good end of the weather when he won at St. Andrews in 2010, had a tap-in for par when a gust blew his golf ball a few feet away. As he stopped and smiled in disbelief, another gust moved it even further away.

About that time, Brooks Koepka tried to mark his ball five times on the 11th green – the most exposed on the golf course with the Eden Estuary on one side and St. Andrews Bay on the other – when play was halted.

R&A rules director David Rickman said his staff spent an hour on the 11th green without seeing a ball move, leading to the decision to try to play.

“What we weren’t expecting when we made the decision to go was the wind picked up,” he said. “We picked up 10 percent – 6.5 kph – in the half-hour after we started. We were close to the edge, anyway. That was the difference. As an administrator, my heart sank. Because I thought, `This has changed.’ It was always going to be a difficult day.”

Jordan Spieth, going after the third leg of the Grand Slam, was caught on television saying, “We never should have started.”

All it took was a half-hour for the wind to wreak havoc on the Old Course.

Johnson was at 10-under par and played his third shot from just short of the green on the par-5 14th. He chose to pitch it up a steep bank instead of using the putter, stubbed and barely reached the flat level of the green some 50 feet from the flag. His coin was a fraction away from marking his ball when it rolled away, down the slope and right toward Spieth’s ball. Spieth ran over, then quickly moved out of the way as Johnson’s ball rolled by.

Johnson putted the next one to about 15 feet and missed that for a bogey to fall into a tie at 9 under with Danny Willett, the clubhouse leader at 9-under 135. Spieth rolled his putt up to 8 feet and missed the birdie try. It was his fourth three-putt of the round. He was four shots out of the lead.

Up ahead, Brendon Todd had three holes to finish. He three-putted the 16th and 17th for bogeys and made par on the last hole to assure making the cut.

The temperature was cold in the wind. Todd was running hot, especially after play was halted right when he finished.

“I was pretty frustrated,” he said. “I three-putted 16 and 17, and then they’re going to call play. Why did we even start in the first place? Everyone is going to play in difficult conditions. With links golf, you get different draws and that’s the nature of the game. What I don’t like is when they make a bad decision to start in the first place.”

The real trouble was at the loop – holes 7-11 that are the most exposed.

The incident with Koepka was one thing. But when word came in that wind was affecting the inward holes – Oosthuizen on No. 13, for example – it was clear it had to stop.

It all added to another long day at St. Andrews, and it sure felt that way to David Duval, Stewart Cink and Ben Curtis. They woke up early to warm up and be in position at 7 a.m. They were to start on No. 11. But with Koepka’s issues on the green, they stood on the tee for more than 30 minutes without ever hitting a shot. Duval said there were three groups waiting on the tee when the siren sounded to stop.

The R&A said it was unlikely the second round would resume until 3 p.m., and the last group is still on the ninth hole. The third round was to feature threesomes, and Rickman was trying to figure out how to finish by Sunday. The forecast for the final round is for calmer conditions.

The last time the Open finished on a Monday was in 1988 at Royal Lytham & St. Annes because of rain. Seve Ballesteros won his third claret jug over Nick Price, Nick Faldo and Fred Couples, all of whom are in the Hall of Fame.