Woods returns with a mixed bag and a 73 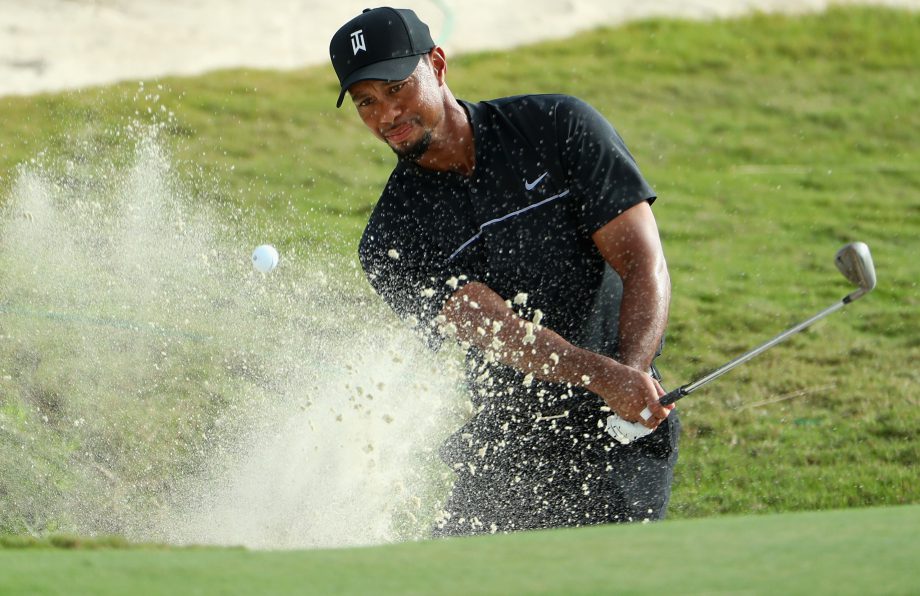 NASSAU, Bahamas – Not only did Tiger Woods return to golf Thursday, he returned to being Tiger.

Just not for long.

Hardly looking like a player who had not competed in 466 days, Woods ran off three straight birdies with a variety of shots and was tied for the lead in the Hero World Challenge as he approached the turn.

Three shots in the bushes, one shot in the water and a few fits of anger sent him toward the bottom of the pack. A pair of double bogeys over the final three holes ruined an otherwise impressive return, and Woods shot 40 on the back nine at Albany Golf Club and had to settle for a 1-over 73.

He was in 17th place in the 18-man field. Only Justin Rose had a higher score.

Even so, Woods has reason to be encouraged. After taking off 15 months to recover from two back surgeries, he felt no pain or limitations. His misses were not big, just costly. And he was playing again.

“It could have been something really good,” Woods said. “I got off to a nice, solid start and made a few mistakes there. I didn’t play the par 5s very well in the middle part of the round and consequently, got it going the wrong way. … But all in all, I feel pretty good. I’m looking forward to another three more days.”

He was nine shots behind J.B. Holmes, who opened with an 8-under 64 and had a one-shot lead over Hideki Matsuyama, with U.S. Open champion Dustin Johnson at 66.

Curiosity was greater than expectations for Woods, who was coming off the longest hiatus of his golfing life. Plagued by back problems since 2013 when he was No. 1 in the world, he finally shut it down after tying for 10th in the Wyndham Championship on Aug. 23, 2015, and then going through two back surgeries.

He was in so much pain last year there were times he wondered he had played his last tournament.

With high anticipation, he tugged his opening tee shot into the rough on the left edge of a bunker and gouged that out to 15 feet for par. Just like that, it all started to feel as though he had never been away.

He also knew that with only a stiff tropical wind behind him on three of the par 5s, scores would be low.

For a short time, Woods seemed up to the task. He hit a 5-iron from 231 yards just over the green and passed his first test, a 30-yard pitch-and-run and that checked slightly and rolled out to a few feet from the hole for a birdie . He faced a more difficult pitch up the slope on the next hole and hit a chunk-and-run to 3 feet.

At that point he was tied with Holmes.

But he flubbed a pitch on the par-5 ninth and made bogey. Two holes later, he flared an iron from the sandy waste area into a bush and had to take a penalty shot, making another bogey on a par 5. Woods was still hanging around in the middle of the pack when he hit 7-iron to 12 feet on the par-5 15th and two-putted for birdie.

And then it all fell apart.

Froom the middle of the 16th fairway, he pulled his approach and dropped the club as it sailed into a bush. He had to play that backward to the fairway, pitched a wedge some 30 feet by and made double bogey. And then on the 18th, he pulled his driver and immediately slammed the club into the turf as he watched for the splash.

His pitch hit the pin – it was too strong, anyway – and he missed from 20 feet for another bogey.

“Just made some really silly mistakes, mistakes I don’t normally make,” Woods said. “But I haven’t played in a while. Unfortunately, I made those mistakes. I can clean that up. We’ve got three more days. Wind is supposed to pump on the weekend, and I’ll be playing a little bit better.”

Highlights from Tiger’s round: