Woods shoots another 74, fails to make cut at PGA Championship 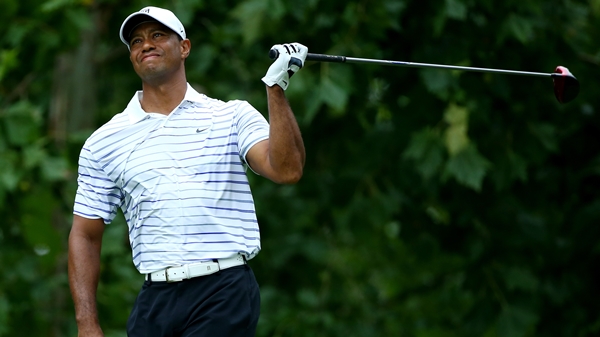 LOUISVILLE, Ky. – For Tiger Woods, there was a familiar complaint.

Yes, his back was hurting again.

His performance at the PGA Championship is becoming more the norm, as well.

Once the game’s most dominant player, Woods looked old and tired at Valhalla. He was surely overmatched Friday, shooting his second straight 3-over 74 to miss the cut at one of golf’s majors for only the fourth time in his professional career.

Not that this was a big surprise.

Woods was playing in only his fourth tournament since back surgery in late March, and he hasn’t been a factor in any of them. He failed to make the cut at the Quicken Loans National. He had his worst 72-hole showing in a major at the British Open. He had to withdraw on the final day of the World Golf Championship at Firestone after taking an awkward swing and hurting his back again. He showed up Wednesday at Valhalla, proclaimed himself fit – and flopped again.

“I tried as hard as I could. That’s about all I’ve got,” Woods said. “Unfortunately, I just didn’t play well. Consequently, a pair of 74s is not very good.”

With the cut at 1 over, Woods wasn’t even close to playing on the weekend.

He was effectively done after shooting a 4-over 39 on the front nine, including a double bogey at No. 6 – where he three-putted from 18 feet – and a really ugly bogey at the par-5 seventh. He drove into a muddy bog far left of the fairway and had to punch out. He sailed his third shot over the green, and a sloppy chip came up short.

Woods played better on the back side – a couple of birdies, a single bogey – but he was all done at that point.

He said his chances effectively ended when the same problem that left him barely able to bend over at Firestone cropped up again on the driving range at Valhalla.

“I was sore,” Woods said. “There was no doubt I was sore. It went out on me on me on the range. I just had to play through it.”

There were no obvious indications of pain on the course, certainly nothing like his tortured departure from last week’s tournament. He appeared to reach for his back a little after the errant tee shot on No. 7, but didn’t actually touch it. There were plenty of grimaces, but those usually came after he hit another poor shot.

Woods insisted he had the “same feeling, same pain, same spasms” that forced him to drop out at Firestone, though he was encouraged that it wasn’t in the same spot as his back surgery.

“It was telling me on the range that it probably wasn’t a good idea (to play),” he said, referring to his back. “I couldn’t make a back swing. I can’t get the club back. I’m coming through fine. I just can’t get the club back. That throws everything off. I can’t get anywhere near the positions I’m accustomed to getting to. I just can’t do it. I have to rely on my timing and my hands, and hope I time it just right.”

He’ll not have plenty of time to work on his game and build up his strength.

If he doesn’t play next week at the Wyndham Championship in Greensboro, North Carolina, – and he never has – his season is over. Woods needed to win the PGA to qualify for the FedEx Cup playoffs.

It also seems highly unlikely that Woods will be one of the wild-card picks by U.S. Ryder Cup captain Tom Watson, who said over and over that he wanted to see some sign the 14-time major champion was rounding into form.

Instead, Woods can’t even beat the 64-year-old captain, finishing behind him at the British Open and three shots worse at the PGA.

“I don’t know,” Woods said, when asked about his chances of being chosen by Watson. “He hasn’t called.”

Might be best if he sits out this Ryder Cup.

Woods conceded he needs to get stronger and more fit to have any chance of being close to the player he once was.

“I felt like I wasn’t that far away when I came back at the Quicken Loans,” Woods said. “But obviously, the more I play, I can’t develop my strength while playing a lot. I need to get back in the gym and get stronger.”