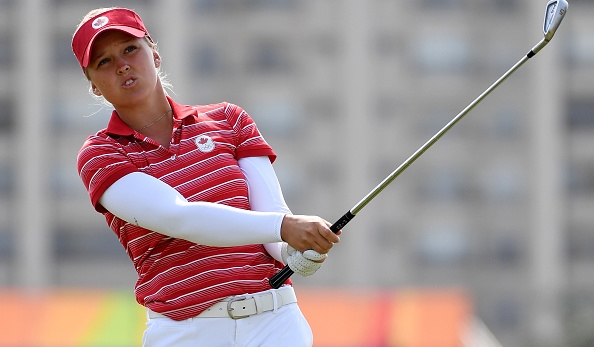 RIO DE JANEIRO — Brooke Henderson signed a few autographs and posed for some pictures after her final round Saturday, the frequent cheers from the grandstands behind her a reminder that others were still playing for the Olympic hardware she coveted.

She knew her 67 wouldn’t be enough to crack the top three at the Rio Games, a respectable 8-under-par 276 eventually leaving her in a tie for seventh place.

The final group came in about an hour after Henderson emerged from the scorer’s tent, a look of disappointment seared on her face.

South Korea’s Inbee Park would run away with the gold medal, a 5-under 66 giving her a 268 and a five-shot win. Lydia Ko of New Zealand birdied the last hole for the silver and China’s Shanshan Feng took the bronze.

Henderson fought hard all day, an aggressive push on the back nine of the Olympic Golf Course nearly paying off.

She birdied the 14th hole, added another birdie on the 16th and just missed a birdie putt on the 17th.

Knowing an eagle on the par-5 18th hole would be needed to have any kind of chance, Henderson crushed both her drive and approach shot. However, a 53-foot putt rolled just past the hole to snuff her faint medal hopes.

“Credit to her, she was 4-under at the start of the day and she pushed for a medal,” said Canadian coach Tristan Mullally. “You can’t ask for any more than that.”

Henderson did well to contend after a disappointing 75 on Friday. She declined to speak to reporters in the interview area after that round, no doubt still reeling from a rare four-putt on the 16th green.

She started play Saturday in a tie for eighth place, just five shots off the pace for a medal. Henderson recovered after a bogey on the opening hole, scoring birdies on three of her last five holes entering the turn.

Henderson saved pars on the 11th and 12th holes before taking a bogey on No. 13 after missing a nine-foot putt. That forced her to really go for it down the stretch.

“Unfortunately I just missed out but that (bogey) gave me momentum to get my rear in gear and I made birdie on 14 right after,” she said. “After that I was trying to make birdies, I was trying to make an eagle out there on the last (hole) to move my name up a little bit more.

“But at the end of the day I tried my best.”

With two tournament victories — including a major — already under her belt this season, it’s easy to forget that Henderson is only 18 and still in her first full year on the LPGA Tour.

She showed flashes of brilliance this week and also endured some hiccups along the way. It was a learning experience, she said, both on and off the course.

“A lot of them are personal things, but just handling situations,” she said, when asked to expand on what she had learned. “I kind of had some rough weeks so coming here and trying to improve was a big goal for me and I think I did that.”

Henderson, from Smiths Falls, Ont., defended her title in Portland in June but finished well behind at her next three tournaments ahead of Rio.

Cracking the top three in the world rankings and earning over US$1.3 million would be dream accomplishments for many players on the Tour, but the young Canadian is always aiming higher.

“She’s a fighter,” Mullally said. “She grinds hard and gets the most out of her game. I think that’s probably what separates her from a lot of players. Some players have to play well to have a good score. Brooke normally tries to get the best score out of however she’s played.

“That’s unique in terms of her and that’s why she has so many top-10s and why she’s done so well so early (in her career).”

Finishing in the top 10 — although outside the top three — would normally be a satisfying result.

At the Summer Olympics, it may be a position more painful than any other.