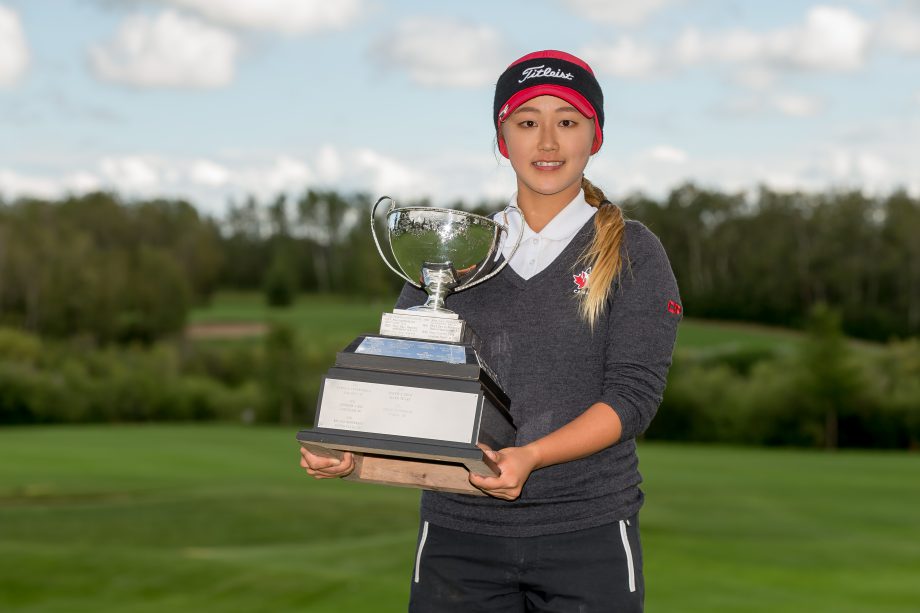 The 18-year-old Team Canada Development Squad member’s third-round 69 propelled her ahead of the competition with a 4-stroke lead through 54-holes; she went on to finish the championship at 6-under par 286.

“This is probably the biggest achievement that I’ve ever made. I mean I still can’t believe it; it feels amazing especially because it is my last junior tournament and I’ve worked really hard,” said the native of Surrey, B.C.

Kim managed four rounds at even-par or better through high winds and rainy conditions to capture the championship by two strokes.

“I’ve played this tournament for many years and I’ve gotten close, but I was never really that close to winning. To win this just really gives me a big confidence boost going into the University of Idaho and competing in NCAA tournaments,” said Kim.

Fellow Surrey, B.C., native and provincial teammate Hannah Lee finished her final round at 2-under par to claim solo-second at 4-under for the championship. Lee’s round was highlighted by four birdies and an eagle on the par-5 second hole.

“I was close to winning it, but I’m really happy for Michelle. I’ve seen her golf ever since I started playing tournaments, so congrats to her,” said the 15-year-old who claimed the Juvenile Division title. “It’s an honour to win the Juvenile part of Nationals,” said Lee who didn’t think she would play as well as she did in this championship.

“I will take my experience from this tournament, I’m going to think about the memories I had here and remember to use them for my next tournaments so I can be more successful,” said Lee, who opened the competition with a competitive course record of 66.

Rounding out the top-three in the overall standings was Team Canada Development Squad member Naomi Ko. The 17-year-old from Victoria shot a final round of 72 to finish at 3-under 289 for the national championship.

Kathrine Chan finished in second in the Juvenile Division, 3-shots back of the winner. The 15-year-old began the championship in fast fashion with a 4-under 69 and played steady golf to earn runner-up honours.  The Richmond, B.C., product shot an even-par final round with four birdies to finish 1-under for the tournament.

Three shots back at 2-over par 294 and wrapping up the top-three in the Juvenile Division was 12-year-old Euna Han. The Coquitlam, B.C., native tallied a hole-in-one on No. 8 and added two birdies to her round of 4-over 77.

An Inter-Provincial competition coincided with the first two rounds and saw Team British Columbia comprised of the Junior and Juvenile champions, alongside Victoria native Akari Hayashi, capture the team championship by 20 strokes at 7-under par.

For full results and information regarding the 2015 Canadian Junior Girls Championship, click here.