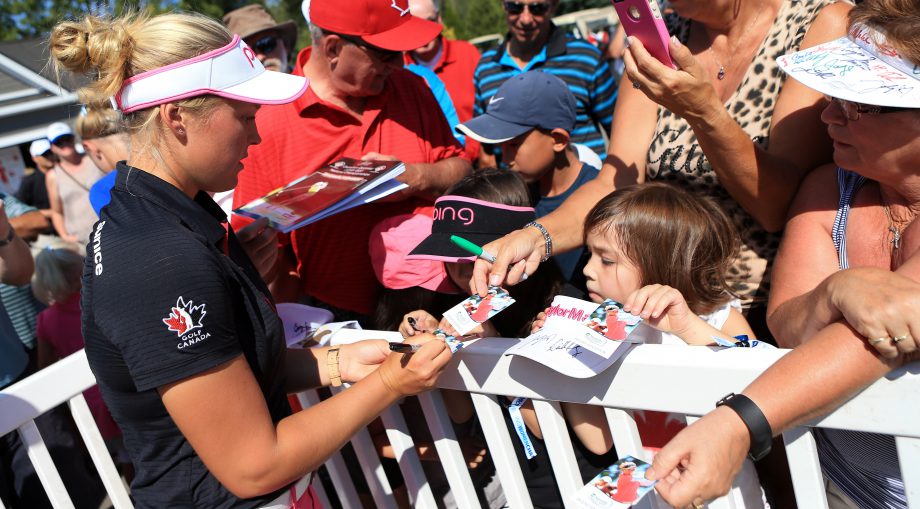 CAMBRIDGE, Ont. – Brooke Henderson is on a mission to grow the sport of golf.

The 18-year-old phenom, ranked third in the world, wants to make the game she loves more popular in Canada, one fan at a time. Just a year into her professional career, it seems like Henderson’s already had an impact in Canada.

“If I can try to help grow the game or inspire someone to pick up this game, this amazing game, it really makes me feel awesome,” said Henderson after her final round of play at the LPGA Manulife Classic. “They were yelling my name between shots and high fives at the end of the holes.

“It’s just really cool to see and a lot of fun. I think if even half of these people start to play the game if they didn’t before, I think that would be just incredible.”

After answering reporters questions Henderson went to meet dozens of fans, signing autographs and taking pictures for nearly half an hour at Whistle Bear Golf Club. Many of the fans waiting for Henderson were girls not much younger than her, who have taken to wearing her signature pink visor and enjoy the nickname “Brookealike.”

There’s tangible evidence that Henderson is making women’s golf more popular too: Attendance at this year’s Manulife Classic was up to 68,000 from 63,000 the year before, with Henderson drawing the biggest crowds.

Other golfers have noticed the uptick too.

“It was great to see a lot of people out here and especially a lot of juniors,” said world No. 1 Lydia Ko, a native of New Zealand. “I think when we come to Canada, I think it’s probably the most juniors we see on any of our tour schedule, so it’s always good to see the future stars.”

Henderson has allies in her mission too. Fellow Canadian Olympian Alena Sharp, from Hamilton, announced after her final round that she wants “more Canadians out here.”

Sharp was the low Canadian at the Manulife Classic, firing a 2-under 70 in the final round to tie for 26th at 9-under par. At the start of the year it was Sharp’s goal was to be ranked in the LPGA’s top 60 by the end of the season. She’s already accomplished that and is No. 34.

“It seems like Canadian women’s golf is heading in the right direction,” said the 35-year-old Sharp. “We have a lot of great young players coming up, and Golf Canada has been working hard getting these players developed, and they have everything – great coaching, great nutritionists, they have great physio and workout, and it’s starting to show, I think.

“I think five years from now we’re going to have a lot of top players in the world.”

Henderson, from Smiths Falls, Ont., was 1-under 71 on Sunday to tie with Maude-Aimee Leblanc of Sherbrooke, Que., who shot a 3-under 69 in the fourth round, to finish 39th. Quebec City’s Anne Catherine Tanguay shot 1-over 73 in the fourth round to tie for 44th at 6 under. All four Canadians said they’d hoped they’d inspired some young golfers with their play this week.

“I think it’s booming, and especially with Brooke, Alena and the Canadian national team has – the program’s been doing so much for women’s golf and young girls, too,” said Tanguay. “So I think it’s getting there, and we’ve seen so many young girls out here this week and throughout this season, too, and it’s so good to see that we can help grow the game.”