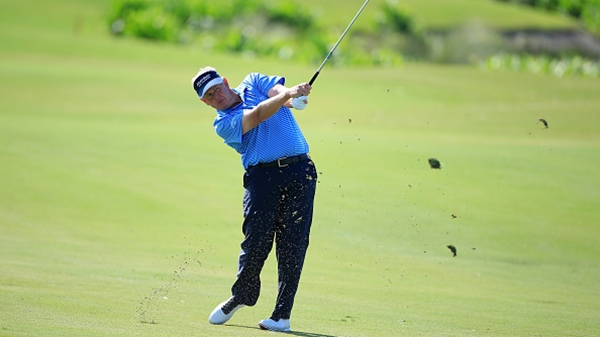 SAUCIER, Miss. – Colin Montgomerie and Joe Durant shared the lead at 5-under 67 on Friday after the breezy first round of the Champions Tour’s Mississippi Gulf Resort Classic.

Montgomerie finished with a birdie on the par-4 ninth hole at Fallen Oak. The Scot won the Senior PGA Championship and U.S. Senior Open last year.

The players faced 10-20 mph wind out of the northwest with stronger gusts.

« This is a mere breeze where I’m from, » Montgomerie said. « Five-under par is a good score today. Anything under par is a good score today with very testing conditions. Every shot today was different from yesterday because the wind was completely different. This is a very, very good course, perhaps the best we play on this tour, and it’s even more challenging in the wind. »

Durant also closed with a birdie on No. 9. The four-time PGA Tour champion is winless on the 50-and-over tour.

« The wind was tough out there, » Durant said. « It was swirly and gusty, but if you can put the ball in the right places on the greens, you can make some putts. It was a good test today. »

Durant is playing in this event for the first time, but his resume includes a win in the 1996 Nike Tour Mississippi Gulf coast Classic. He grew up in nearby Pensacola, Florida.

« It’s nice to only be a couple of hours from home, » Durant said.

Jeff Maggert, the winner last year in his tour debut, shot a 73.

Miguel Angel Jimenez closed with a double bogey for a 76. The Spaniard won the season-opening event in Hawaii in January for his second victory in three career Champions Tour starts.

Jesper Parnevik also struggled, making a triple bogey on the par-3 third in a 76. He tied for 42nd last year in Tucson in his Champions Tour debut, shooting 71-74-71.