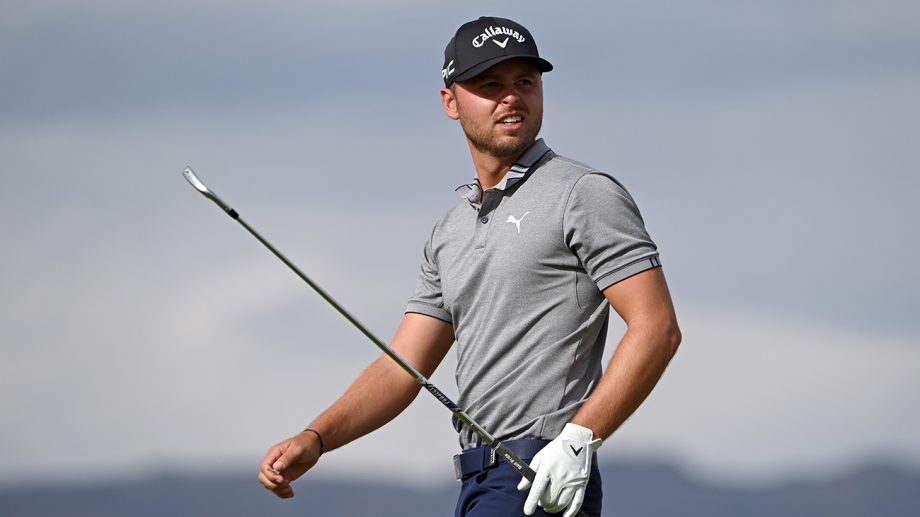 LAS VEGAS, NEVADA - APRIL 16: Adam Svensson look on after his tee shot on the 18th hole during the second round of the MGM Resorts Championship at Paiute at the Las Vegas Paiute Golf Resort on April 16, 2021 in Las Vegas, Nevada. (Photo by David Becker/Getty Images)
Korn Ferry Tour Communications

LAS VEGAS – Canadian Adam Svensson matched the course record on Friday to reach 12-under and take a two-stroke lead at the halfway point of the MGM Resorts Championship at Paiute. Svensson leads Kevin Dougherty by two strokes and four players by three at Paiute Golf Resort’s Sun Mountain course.

With calmer conditions, the field averaged more than three strokes lower on Friday (scoring average of 69.455) compared to the first round (73.026) while the cut fell at 3-under 141 with 73 professionals advancing to the weekend.

“A completely different day than yesterday,” said Svensson. “Yesterday was cold and windy, but today was more of a relaxed day.”

Svensson, who broke through with his second Korn Ferry Tour win three weeks ago in Savannah, Georgia, enjoyed an adventurous day on Friday. The 27-year-old scattered 11 birdies, three bogeys and four pars across his 18 holes, including a stretch of eight birdies in 10 holes from Nos. 2-11. The 11 birdies in a single round were the most of Svensson’s Korn Ferry Tour career, besting 10 in a round at the 2018 Memorial Health Championship presented by LRS.

“I think I’ve done it one other time in my life, but it was a long time ago,” laughed Svensson. “You feel like the hole is big, you’re hitting your lines and you’re feeling confident. You just have to make good strokes and be feeling it out there.”

With his win in Savannah, Svensson leaped from 40th to 12th in the Korn Ferry Tour points standings. A win this week would guarantee him a return to the PGA TOUR this fall after competing there during the 2018-19 season.

“I learned that you don’t have to play perfect golf,” said Svensson of his win in Savannah. “I hit a lot of bad shots out there today and a lot of good shots. You just kind of have to make those par saves and those birdies when you can.”

Svensson is chased by Dougherty who is seeking his first career victory after three runner-up finishes in his career. Dougherty, an Oklahoma State alum, has earned finishes of 2nd-MC-T36-T16-T10 over his last five starts.