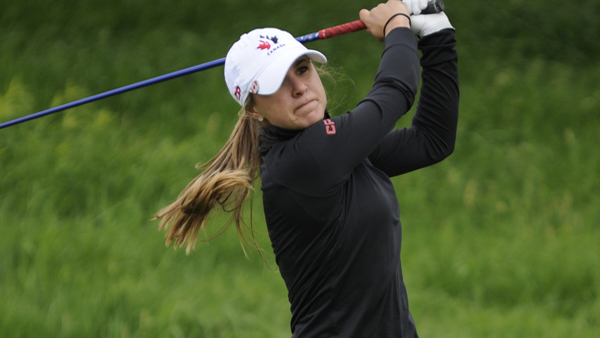 SANDWICH, KENT, England – Team Canada’s Anne-Catherine Tanguay is the lead Canadian after carding a 1-under 73 in the first round of the Ladies British Open Amateur Championship.

Tanguay, a Québec City native, posted four birdies en route to her strong finish – she ended at T11 for the day. The recent University of Oklahoma grad will look to stay in control at the Royal St. George’s Golf Club when play resumes tomorrow.

Dewi Webster of the Netherlands sits alone atop the leaderboard, sitting at 5-under par after a bogey-free opening round of 69.

Ha, a junior at Kent State, claimed the highlight of the day by holing her second shot on the par-4 9th. She currently sits at T42 after an opening round of 76.

James and Marchand experienced similar struggles with the difficult conditions at St. George’s. The N.C. State students shot rounds of 80 and 82, respectively.

The girls will tee-it-up again tomorrow and will look to make the cut line, with the top 64 players qualifying for match play rounds beginning Thursday.