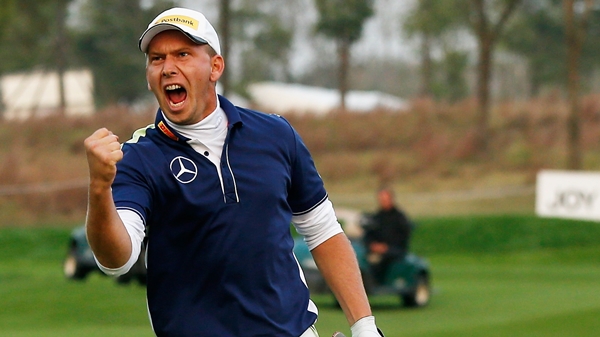 SHANGHAI – Marcel Siem took the lead for the first time on the 16th hole Sunday and figured two pars would be enough for him to win the BMW Masters.

He should have known it would never be that simple.

A relentless wind at Lake Malaren turned the final round into a wild ride for just about everybody, and not even Siem was immune. The German finished the final round with two bogeys instead of two pars. And then he won a three-man playoff over Alexander Levy of France and Ross Fisher of England by chipping in for birdie from the collar of the 18th green.

“The course was a real monster, and I’m super pleased,” Siem said. “Still can’t believe it. I’m over the moon.”

Siem felt more pressure over an 8-foot par putt on the 18th to win in regulation. Facing the tougher situation – his shot with a 5-iron came up just short and hung in the collar – he felt he had nothing to lose and wound up winning.

“I thought just to stay in the playoff, I have to hole it,” said Siem, who closed with a 1-over 73. “I was expecting one of the guys to hole the putt. It’s just fantastic. A chip-in is always cool, but to have it in a playoff is even cooler.”

Levy had a four-shot lead to start the final round. He had to scramble for bogey on the 18th hole for a 78 to join the playoff. Fisher had a chance for the biggest comeback in European Tour history. He was 11 shots behind going into the last round, closed with a 67 and was the first to post at 16-under 272.

Levy and Fisher both had birdie putts in the playoff on No. 18, the toughest hole at Lake Malaren. After watching Siem chip in for birdie, both missed their putts.

The fourth victory of Siem’s career sends him across town to the World Golf Championship next week. The timing could have been better. Siem was expecting a week off, so his wife flew to Thailand to join him for a holiday. Trophy in hand, he was trying to arrange a visa to get her to Shanghai for the next tournament.

“Would have been the first time in five years on a holiday on our own,” he said. “But I think she will be still happy not to do that.”

What had been an easy week for scoring on a soft, benign golf course turned into a test of survival in the 25 mph wind.

Levy stopped hitting short irons at the flag, and when he closed out the front nine with back-to-back bogeys, his four-shot lead was gone. He built it back to two shots when Siem made a pair of sloppy bogeys, but then the Frenchman drove into the water on the par-5 13th and made double bogey. Levy then missed two short putts – for par on the 14th and birdie on the 15th – that would have allowed him to regain the lead.

He was fortunate just to get into the playoff. Levy’s approach on the 18th in regulation went left toward the water, crossed the hazard line and stopped a foot short from a splash. He chipped over the green and had to make a 5-foot bogey putt to keep playing.

“He deserved to win today because he played fantastic in the wind,” Levy said. “It’s nice for him. And I’m not very disappointed because I played three days of amazing golf and I think I need to keep that in my mind.”

Fisher had the low score Sunday, making six birdies against only one bogey for his 67. Only three other players broke 70, while eight players were in the 80s. That included Miguel Angel Jimenez, who hit four shots into the water on No. 9 and took a 13. He shot an 88.

“You never expect to have a chance,” Fisher said, referring to his 11-shot deficit. “I’m thinking, `Just go out there and shoot a good score. If it gets me a top 10, that would be great.’”

It almost was better that that. Paul Lawrie (1999 British Open) and Jamie Spence (1992 European Masters) share the European Tour record by rallying from 10 shots behind in the final round.

Jamie Donaldson of Wales, who won the clinching match for Europe in the Ryder Cup, put two balls into the water in the round and closed with a 75. Donaldson had a chance to get into the playoff with an 18-foot birdie putt on the last hole. He left it short.

“Concentrated so hard on the line and don’t hit the putt. But there you go – that’s golf,” Donaldson said.

Justin Rose also could have made the playoff, except that he put his approach into the bunker left of the 18th green, blasted out to 18 feet and narrowly missed his par putt. Rose closed with a 72.

“Playing from 13 onwards, it was hang on for dear life,” Rose said.

The BMW Masters is the first of four tournaments in “The Final Series” that wrap up the European Tour season. Siem moves all the way up to No. 4 in the Race to Dubai.