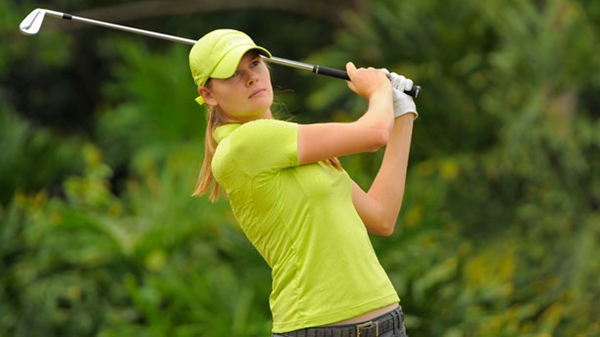 DAYTONA BEACH, Fla. – The scene is set for a climactic finish. Maude-Aimee Leblanc of Sherbrooke, Que. fired a 1-under 71 to snag sole possession of the 54-hole lead on Saturday at the Symetra Tour Championship presented by Embry-Riddle Aeronautical University.  She is 11-under 205 for the tournament and two strokes clear of American Rachel Rohanna, who is 9-under 207 after a 1-over 73 in the third-round.

The final four LPGA cards are still up for grabs with one day left as five players between No. 11 and No. 21 on the Volvik Race for the Card money list are currently tied for 14th or better.

The equation is simple for Leblanc.  If she wins on Sunday, she has a good chance of fitting inside the top-10 on the money list.  The $22,500 winner’s payout would jump her from $25,229 to $47,729, which is more than No. 8 on the current money list.  If she finishes second or higher, she will go to Stage III of Qualifying Tournament.

“It’s fun, it has been a while since I have been in this position,” said Leblanc, about being 18-holes away from her first professional win.  “It’s nice to be at the top and I am just going to keep doing what I am doing.”

Leblanc was last in the position at the third event of the year, the Florida’s Natural Charity Classic when she slept on the lead going into the final day, but finished four shots back of Cindy Feng in a tie for second.  Leblanc shot an even-par 72 on the final day while Feng fired a 5-under 67 to win.

“Cindy played really well that day. I did everything I could to stay there, but she took the tournament.”

Leblanc hopes that the experience in Lake Wales will help her in Daytona Beach.

“I feel very comfortable on this golf course. It fits my game really well.  I hit the driver really well which is a big advantage here especially when it doesn’t roll because it is wet.”

So, does Leblanc think she needs to go get the tournament like Feng did in Lake Wales?

“For now, I’ll stick to my game plan.  If I need to be a little more aggressive I can always adjust.”

Other Canadians with chances at earning LPGA Tour cards for 2015 are Sara-Maude Juneau of Fossambault, Que. and Brantford, Ont.’s Nicole Vandermade. The pair are in a group tied for 7th thru 54 holes at 5-under 211.

If the event had ended today, Juneau’s tie for 7th would leave her 11th on the money list, one spot out of a LPGA Tour card, while Vandermade would finish 15th. Either could climb the money list and earn their tour cards Sunday.