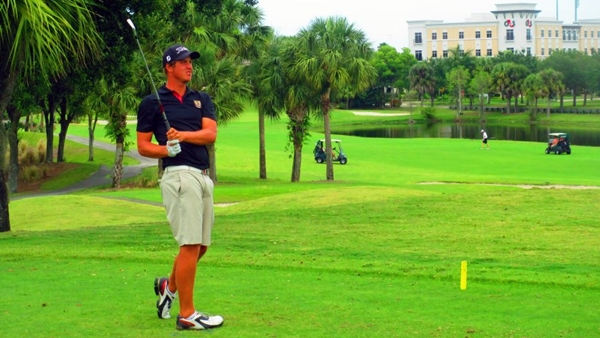 JUPITER, Fla. – Hugo Bernard, an amateur from Mont-Saint-Hilaire, Que., who is committed to the University of Tennessee on a golf scholarship, set a record and equaled another Wednesday in his first appearance on the Minor League Golf Tour.

The result was a five stroke win with Bernard shooting 61-63—124 at Abacoa Golf Club – a new two-day tournament record. The tour’s previous low 36-hole score was 128 by Matt Abbott (Oct. 19, 2007) at Ocean Breeze Golf Club in Boca Raton, Fla. There have been at least four 61s on the Minor League Golf Tour over the years.

“I putted well and played smart,” said Bernard, 20, who had never seen the Joe Lee-designed course before the first round Tuesday.

Bernard started his first round with six consecutive 3’s, turned in 29 and shot 32 on the inward nine. He eagled the par-5 second and sixth holes and finished with seven birdies. His second round also included two eagles, at No. 2 and at the 318 yard par-4 11th when he drove the green. He made five birdies.

Bernard said it was the first time he had played against professionals. He won the Quebec Amateur in 2013 while still in high school and was chosen to play for Team Canada’s Development Squad later that year. His last win was in a Montreal area amateur event last summer.